BB#52 Steady As She Goes

Welcome to the continuing monthly EVE Blog Banters and our 52nd edition! For more details about what the blog banters are visit the Blog Banter page.

* * * * *
Go to the always useful EVE-Offline.net and take a look at the All Time (weekly average) graph for concurrent accounts logged in. 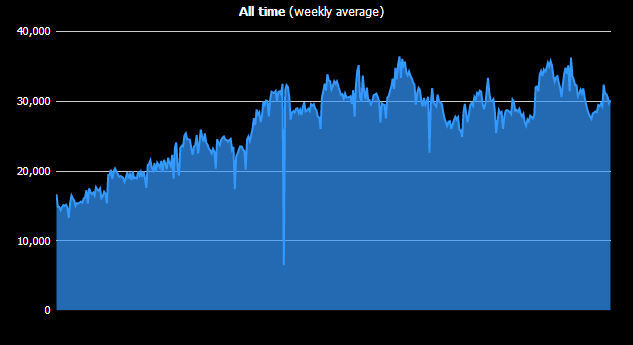 For the past four and a half years, the graph has hovered around that 30,000 mark; it is, for all intents and purposes, a plateau. But everything must come to an end sooner or later and that is what this blog banter is about.

What's on the other side of that plateau?

Is there any path for CCP to follow to raise those numbers upwards for a sustained period, or is EVE going to enter a decline to lower logged in numbers from this point? How soon will we see an end to this plateau? Months? Years? Or will you argue that 'never' is a possibility? Or you can look at the root causes of the plateau and tackle the question if it could have been avoided or shortened if CCP had taken different actions in the past.

I see this plateau in a couple different ways.  I see it as stagnating in terms of expansion, the question of how many of those accounts are unique to one owner, and I even see it as a good investment.  For a video game like Eve, which has a niche type play-base.  It's amazing to see that it's stuck around for 10 years, four and a half of those years have it hovering around 30k concurrent accounts logged in as a weekly average.  While it may seem somewhat disconcerting that it hasn't gained in popularity; on the flip side it hasn't really lost either.

I am not a huge fan of drastic change, I don't change something if it doesn't need to be.  My current desk setup in my room has been the same for the last four and a half years.....(no correlation to Eve, I've only be playing one and half).  You give me two products that do the same thing but one is new and shinier than the other and promises to do the job better, I'll probably stick with the older one if it has a consistent track record even if it is more expensive.

If you ask people if they'd rather have a reliable car for the next 20 years, or a really shiny one which will break down in 2 years.  I'm pretty sure you know what kind of answer you're going to most likely get.  Sometimes it's not so obvious when it comes to video games, some might call it the end of the world or that "the game is dying".  If you look at World of Warcraft which has lost a ton of subscribers (and still has the most btw) it is now reaching a point where it is starting to plateau.  Players may treat that as the game is becoming less popular and will die tomorrow.

However if I were a developer, I would personally like to see a plateau in user numbers.  It gives me the ability to judge my budget and what kind of features I can consistently pump out at set periods of time.  If it fluctuated widely between 60k to 10k users, you may have set up plans for a huge feature only to find it delayed because of the drop of revenue in correlation with a drop in users.  With steady years of consistent usage you can be better prepared for the road ahead.

Also as a developer, even though I like that plateau I also shouldn't become complacent.  Next comes the question of what am I doing wrong?  I'm able to hold a set number of people over a long period of time, but why is my game not attracting others?  When looking for it, one can see the ways companies change their ads over the months and even years.

We'll continue to see changes and CCP's attempts at growing their plateau but unless they hit another "Apocrypha"  with all the hand waving they're doing.  I don't think they're going to break this plateau for a few years yet.  But I also don't think we have to worry about them self-destructing their own game.